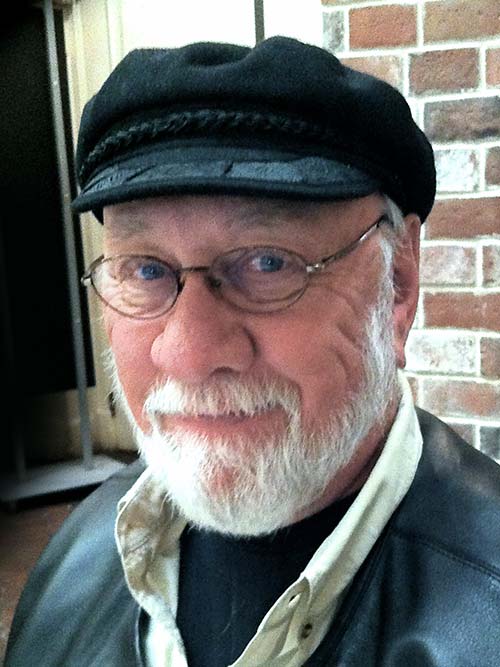 Allan Combs, PhD, is the Doshi Professor of Consciousness Studies and Director of The Center for Consciousness Studies at the California Institute of Integral Studies. He is also the President of the Society for Consciousness Studies and Director of Consciousness Studies master's degree program at the Graduate Institute for Holistic Studies. His background is in consciousness studies, neuralpsychology, and systems sciences. Combs is Professor Emeritus at the University of North Carolina-Asheville . He is author of over 200 articles, chapters, and books on consciousness and the brain, including The Radiance of Being (2nd Ed): Understanding the Grand Integral Vision; Living the Integral Life, winner of the best-book award of the Scientific and Medical Network of the UK, with a foreword by Ken Wilber; Synchronicity: Through the Eyes of Science, Myth, and the Trickster, with Mark Holland; Consciousness Explained Better: Towards an Integral Understanding of the Multifaceted Nature of Consciousness; The Victorian's Guide to Consciousness; The Postconventional Personality: Empirical Perspectives on Higher Development, with Angela Pfaffenberger & Paul Marko; and Dreamer of the Earth: The Relevance of Thomas Berry, Prophetic Visionary, with Ervin Laszlo.

Professor Combs is a co-founder of The Society for Chaos Theory in Psychology and the Life Sciences, a member of The General Evolution Research Group, and the One-hundred member Club of Budapest. He is Co-Editor of the Journal of Conscious Evolution, and Associate Editor of Dynamical Psychology. Allan was the winner of the 2002-2003 National Teaching Award of the Association of Graduate Liberal Studies Programs, and in the same year he held the UNCA Honorary Ruth and Leon Feldman Professorship. 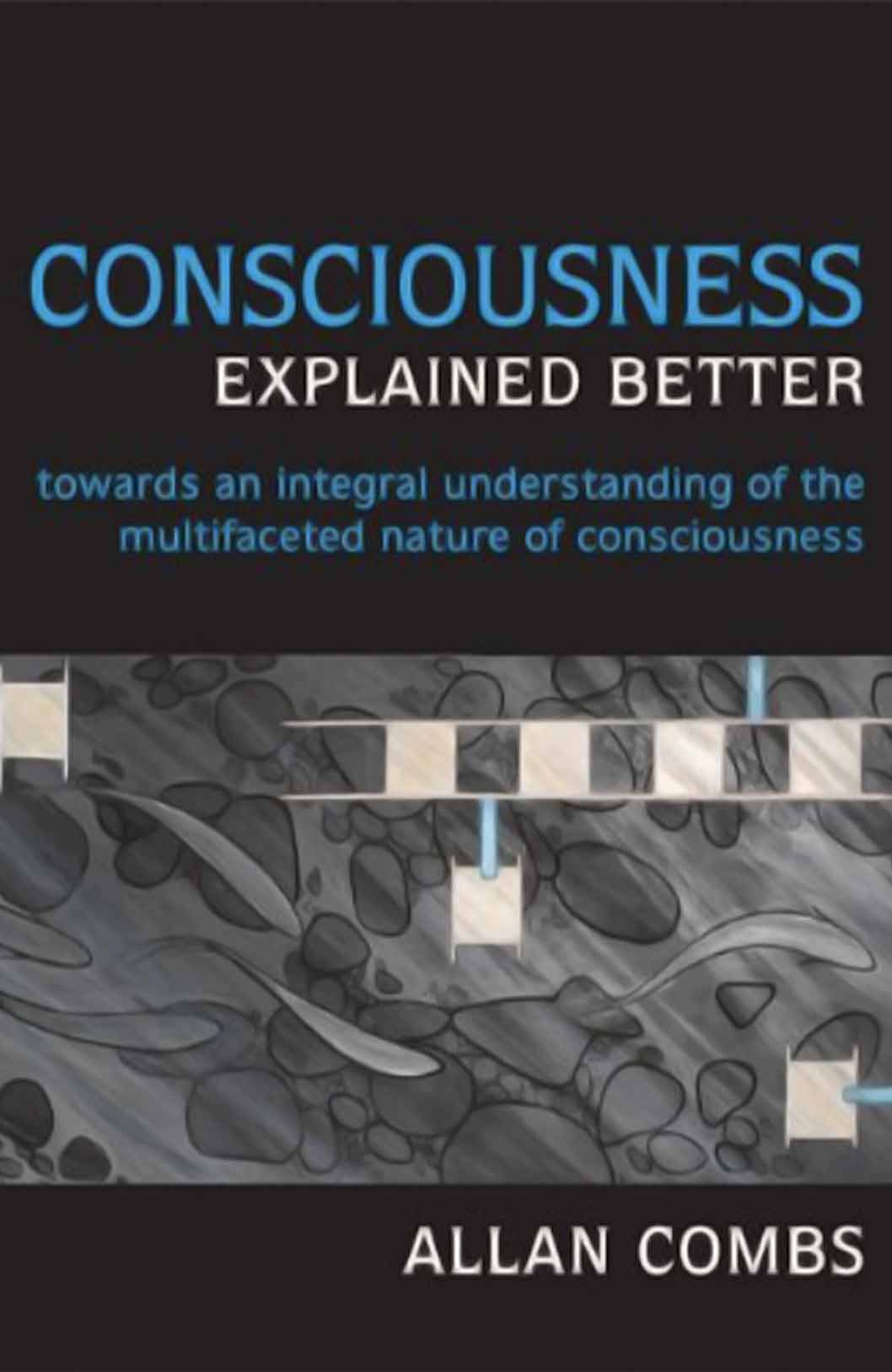 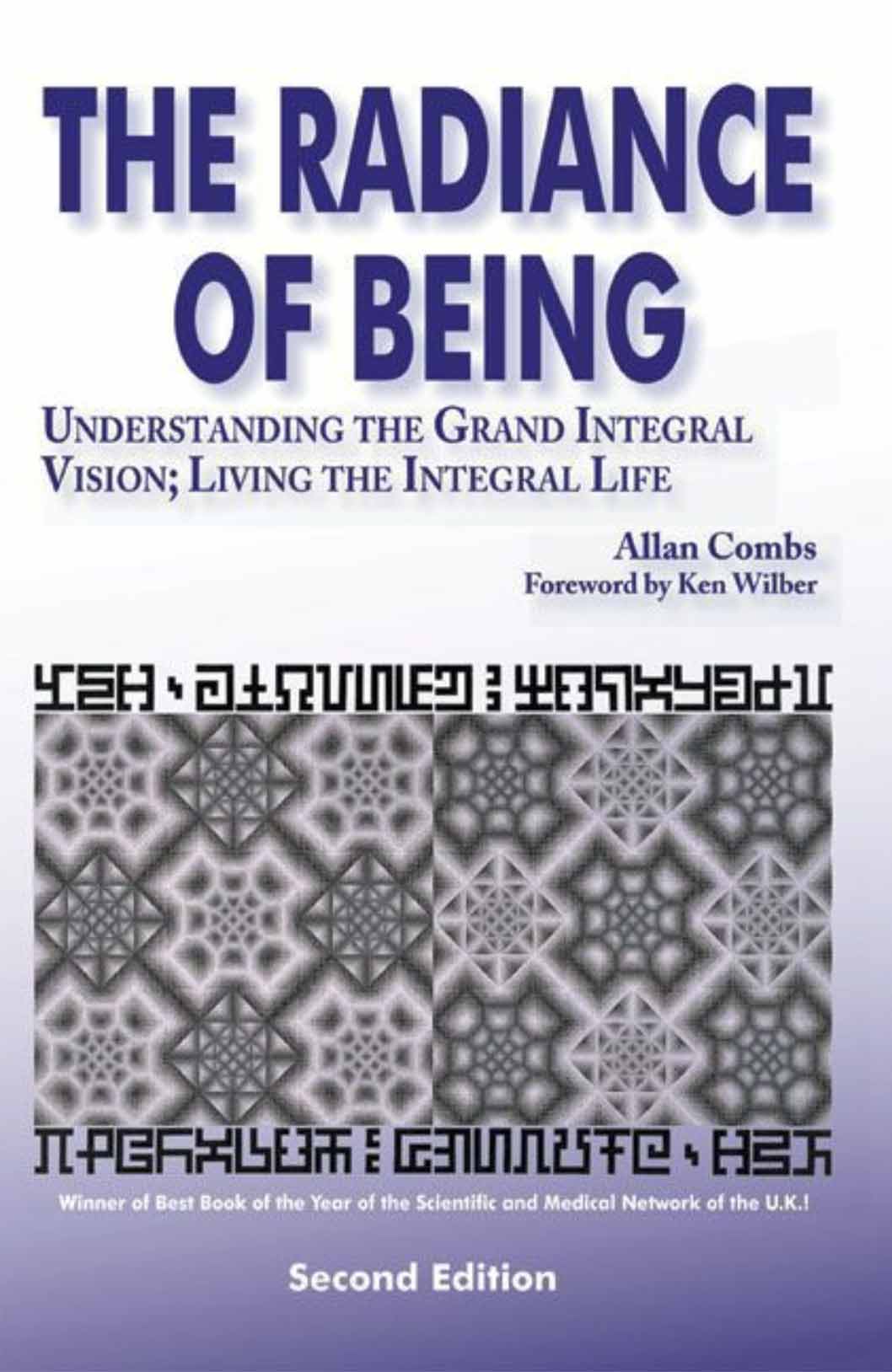 Radiance of Being: Understanding the Grand Integral Vision; Living the Integral Life 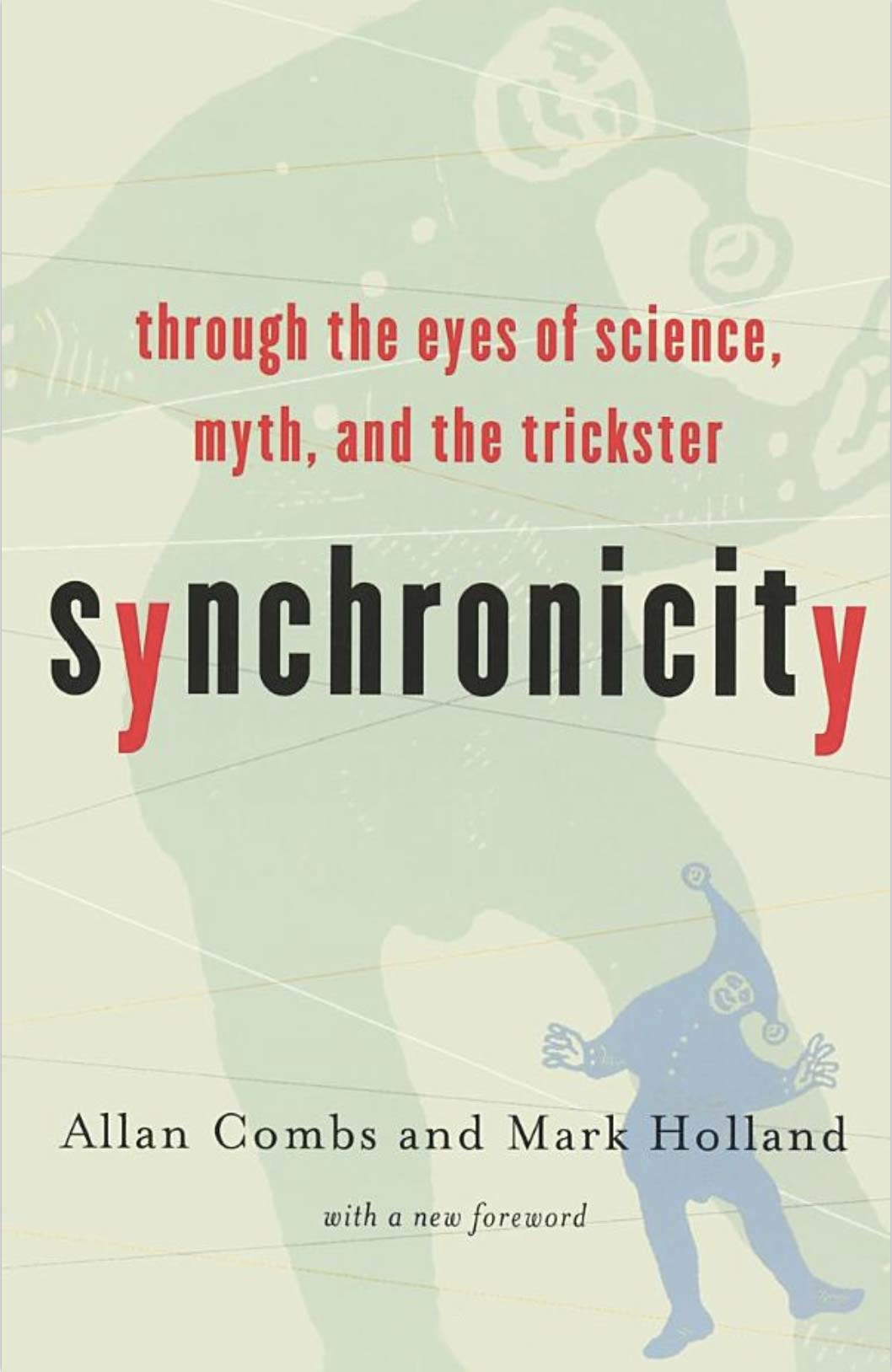 Synchronicity: Through the Eyes of Science, Myth and the Trickster 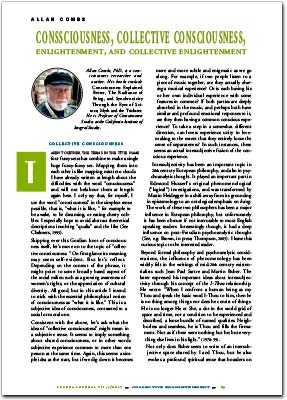 Abstract: The term Collective Enlightenment presents itself ripe with possibilities, but on closer examination it is hard to pin them down. An open search on Google, for example, brings up almost nothing. Indeed, the word " enlightenment " is itself without clear definition. In truth it has no direct counterpart in traditional spiritual texts, and is a transplant from the phrase " European Enlightenment, " referring to the Age of Reason. If the phrase Collective Enlightenment is taken in a societal sense it becomes a sociological term that has little in common with spiritual notions. The present essay, however, sticks to the modern use of " enlightenment " as pointing to spiritual ideas such as realization, awakening, or illumination. It is in these ways that it often replaces traditional terms such as samadhi, nirvana, and moksha in Western translations of traditional Eastern texts. Considering these as experiential states, we come to understand collective enlightenment as a shared or intersubjective experience in which individuality becomes phenomenologically second to a primary intersubjective reality that absorbs the ego into identity with the combined subjectivities of other living beings in a larger experience of unification. Though this form of experience, which we might label illuminated intersubjectivity or Collective Enlightenment, has received little attention in the literatures of religion and philosophy, it has often appeared implicitly in art and poetry, and has been described in philosophical works of science fiction. 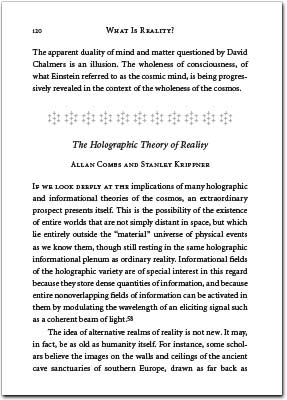 The Holographic Theory of Reality

Allan Combs and Stanley Krippner
What is Reality? The New Map of Cosmos, Consciousness, and Existence, pp 120-124, SelectBooks, 2016

Abstract: If we look deeply at the implications of many holographic and informational theories of the cosmos, an extraordinary prospect presents itself. This is the possibility of the existence of entire worlds that are not simply distant in space, but which lie entirely outside the “material” universe of physical events as we know them, though still resting in the same holographic informational plenum as ordinary reality. Informational fields of the holographic variety are of special interest in this regard because they store dense quantities of information, and because entire nonoverlapping fields of information can be activated in them by modulating the wavelength of an eliciting signal such as a coherent beam of light. 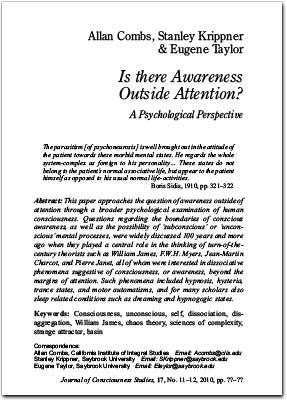 Is there Awareness Outside Attention? A Psychological Perspective

Abstract: This paper approaches the question of awareness outside of  attention through a broader psychological examination of humanconsciousness. Questions regarding the boundaries of consciousawareness, as well as the possibility of ‘subconscious’ or ‘uncon- scious’mental processes, were widely discussed 100 years and moreago when they played a central role in the thinking of turn-of-the-century theorists such as William James, F.W.H. Myers, Jean-MartinCharcot, and Pierre Janet, all of whom were interested in dissociative phenomena suggestive of consciousness, or awareness, beyond themargins of attention. Such phenomena included hypnosis, hysteria,trance states, and motor automatisms, and for many scholars also sleep related conditions such as dreaming and hypnogogic states. 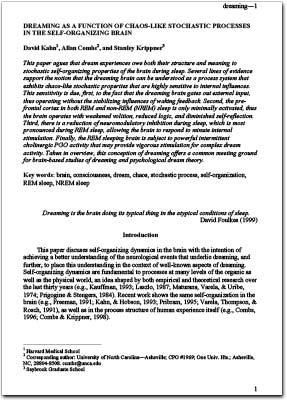 Abstract: This paper argues that dream experiences owe both their structure and meaning to stochastic self-organizing properties of the brain during sleep. Several lines of evidence support the notion that the dreaming brain can be understood as a process system that exhibits chaos-like stochastic properties that are highly sensitive to internal influences. This sensitivity is due, first, to the fact that the dreaming brain gates out external input, thus operating without the stabilizing influences of waking feedback. Second, the pre-frontal cortex in both REM and non-REM (NREM) sleep is only minimally activated, thus the brain operates with weakened volition, reduced logic, and diminished self-reflection. Third, there is a reduction of neuromodulatory inhibition during sleep, which is most pronounced during REM sleep, allowing the brain to respond to minute internal stimulation. Finally, the REM sleeping brain is subject to powerful intermittent cholinergic PGO activity that may provide vigorous stimulation for complex dream activity. Taken in overview, this conception of dreaming offers a common meeting ground for brain-based studies of dreaming and psychological dream theory. 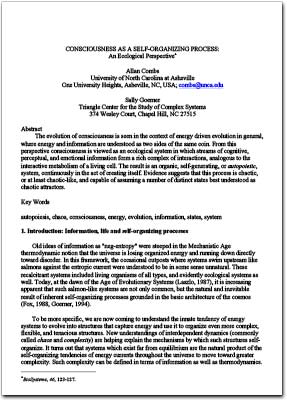 Consciousness as a Self-Organizing Process: An Ecological Perspective

Abstract: The evolution of consciousness is seen in the context of energy driven evolution in general,where energy and information are understood as two sides of the same coin. From this perspective consciousness is viewed as an ecological system in which streams of cognitive, perceptual, and emotional information form a rich complex of interactions, analogous to theinteractive metabolism of a living cell. The result is an organic, self-generating, or autopoietic, system, continuously in the act of creating itself. Evidence suggests that this process is chaotic,or at least chaotic-like, and capable of assuming a number of distinct states best understood aschaotic attractors. 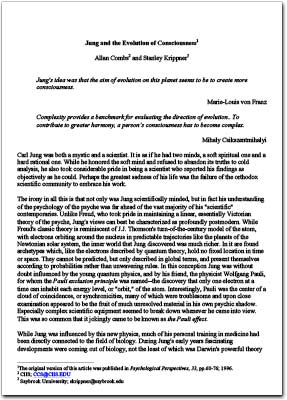 Jung and the Evolution of Consciousness

Abstract: Carl Jung was both a mystic and a scientist. It is as if he had two minds, a soft spiritual one and ahard rational one. While he honored the soft mind and refused to abandon its truths to coldanalysis, he also took considerable pride in being a scientist who reported his findings asobjectively as he could. Perhaps the greatest sadness of his life was the failure of the orthodoxscientific community to embrace his work.

Many more excellent papers are on Academia.edu