An Atheist in Heaven

Evidence for Life after Death from a Lifelong Skeptic? 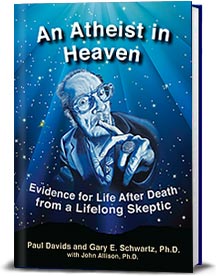 What happens when a lifelong skeptic dies and discovers he was wrong about life after death? Forrest J Ackerman (1916-2008), a luminary in the early history of science fiction and an ardent, lifelong atheist, promised that if he were wrong about the non-existence of an afterlife, he would attempt to send a convincing message to a few people he especially respected. Not only did Forrest leave a physical message for co-author Paul Davids that could not be explained by contemporary forensic science, but Forrest produced an extraordinary wealth of four kinds of converging evidence:

(1) startling physical phenomena (many with clues to his identity)

(3) relevant communications via research mediums, and

(4) astonishing, measurable effects on technology, beyond anything previously documented in the history of afterlife research.

Could this in fact be the ultimate evidence for life after death?

"To use an oft-overused word, this book is AWESOME . The work done by Dr. Schwartz is far-reaching in its implications. I think the world is just now realizing it."
- Deborah Painter , author of Forry: The Life of Forrest J. Ackerman

From the Inside Flap

The distinguished skeptic Dr. Michael Shermer wrote in Scientific American in 2015 that it is the "convergence of evidence" from different sources or domains (called "consilience of inductions in science) that ultimately moves scientific understanding forward. The authors of An Atheist in Heaven conclude that the convergence of evidence connected to apparent post-mortem contact from Forrest J Ackerman is so comprehensive and compelling, that it is perhaps the most important case of After Death Communication - a case that offered many types of testable challenges for laboratories at Indiana University, the College of New jersey and the University of Arizona. Their studies, reports and findings (that include extensive chemical analyses and forensic document examination) are included in this book, along with the unembellished, true personal story of why Mr. Davids was a logical candidate to receive these messages - and experience the phenomena that began in 2009 and continued through 2015.