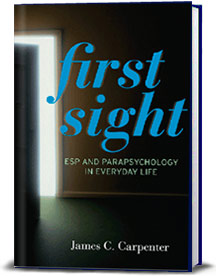 Would you like to know what we have learned about ESP, how it works, and what it is for? First Sight presents an original, highly integrative theory that normalizes psi by placing it in the context of other non-conscious cognitive processes studied by mainstream scientists. The theory is supported by the literature of experimental parapsychology, and grounded in the latest findings in experimental cognitive psychology, neuropsychology and social/personality/clinical psychology. Readers find the approach at once mind-bending and, once digested, curiously obvious. One basic assumption is that psi is not a scattering of dubious, unpredictable anomalous experiences -- it is an ongoing unconscious process that stands behind every thought and action. Hence, psi is not "second sight," it is "first sight."

"Overall, the theory constitutes a transformational contribution to both psi research and the psychology of consciousness."
- Daryl Bem, PhD, Professor Emeritus, Cornell University

"(It is) an intellectual tour de force that deserves a place in the pantheon of groundbreaking scientific works."
- John Ballard, PhD, Mount St. Joseph University

"Beyond the sixth sense and before second sight there simmers a more fundamental First Sight. In this radical reframing of the meaning and mechanisms of psychic phenomena, James Carpenter proposes that where the edges of mind and matter meet all distinctions between inner and outer, subjectivity and objectivity, disappear. . . . A refreshingly novel approach to understanding psychic phenomena."
- Dean Radin, PhD, Senior Scientist, Institute of Noetic Sciences

"In this engaging and beautifully crafted book Jim Carpenter shows in remarkable depth and detail how situating the paranormal in the context of other preconscious receptive and expressive processes allows us to understand a host of existing findings in a way that makes excellent psychological sense - a significant theoretical achievement that should command the attention of parapsychologists and mainstream psychologists alike."
- Edward F. Kelly, PhD Department of Psychiatry and Neurobehavioral Sciences, University of Virginia

"I think it is a masterpiece -- and probably represents the most sophisticated psychological analysis of psi phenomena since F.W.H. Myers' classic over a hundred years ago."
- Jeffrey Mishlove, PhD, Host, Thinking Allowed television series.